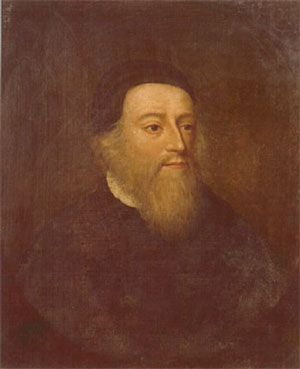 WHO WAS BERNARD GILPIN?

Bernard Gilpin was born in 1517 into a distinguished Westmoreland family, who lived at Kentmere Hall, six miles northwest of Kendal. Gilpin’s father, Edward Gilpin had eleven children by two marriages, Gilpin’s mother, Margaret, was the niece of Cuthbert Tunstall, Bishop of Durham, who was a scholar and theologian and had a great influence over Bernard. After attending Kendal Grammar School, Bernard went on to Queens College, Oxford at the age of 16. He was elected fellow of Queens and ordained in 1542; subsequently he was elected Student of Christ Church.

By the time of Gilpin’s ordination, King Henry VIII had withdrawn England from her traditional obedience to the Roman Papacy, and Gilpin, as many other members of the clergy, as well as laymen and laywomen, found the situation very difficult. Gilpin became (for a while) champion of traditional Catholic teachings; in 1549 he became engaged in a series of debates with some of the leading reformers and this seems to have led him to have doubts about his own faith.

In 1552 he was invited to preach a sermon at Greenwich before the new king (Edward VI), and this sermon appears to have helped him secure appointment as Vicar of Norton-on-Tees. A year later, however, he resigned from this postion and set off on a series of journeys around France and the Netherlands, attending lectures, debates and reading extensively. Returning to England he was presented in 1556 by, Cuthbert Tunstall, Bishop of Durham, with the Archdeaconry of Durham, to which the Rectory of Easington was attached. As Archdeacon he was noted for his attacks on the vices, and especially the clerical vices. This produced much hostility against him, and he was formally brought before the bishop on a charge consisting of thirteen articles by diocesan clergy. The case against him was dismissed as being more about malice than theological error!.

Bernard Gilpin was appointed Rector of Houghton-le-Spring in March 1558, then one of the largest parishes in England covering twenty-four square miles and over 16 villages. The salary was worth £400 per year. This was an extremely large amount of money in those days and the Rectory, where he lived and worked, was described as more magnificent than a Bishop’s palace.

Despite his important status, Gilpin was a generous man who always had the interests of his parishioners at heart. He was looked up to as a judge and did great service in preventing lawsuits.

Each Sunday between Michaelmas and Easter he declared his rectory an ‘open house’ and gave free dinners to all who visited, whether they were rich or poor.Strangers and travellers found a ready welcome; and even their horses were treated with so much care that, it was said that, if one were turned loose in any part of the county, it would immediately make its way to the Rector of Houghton. Gilpin declined several offers of promotion including the Bishopric of Carlisle, preferring to remain a parish priest.

Towards the end of the reign of Queen Mary I Gilpin was arrested as a suspected Protestant “heretic”, but fell from his horse and broke his leg on his way to interrogation. He was unable to reach London before the death of Queen Mary and was thus never brought to trial, possibly saving his life.

Gilpin was a scholarly man and was keen to see that the humble and poor received a good education. Besides his open hospitality to strangers and parishioners, Bernard gave a permanent home to twenty four boys, whom he fed, clothed, boarded and educated, mostly at his own expense. He even sent some of his brightest young parishioners to university. With the financial help of a Londoner named John Heath (who owned land at Kepier near Durham), Gilpin founded Kepier Grammar School at Houghton le Spring in the late 1500s and this helped to improve the educational standards of the district. Among the famous students to attend Kepier school in later centuries was Robert Surtees (1779-1834), the great Durham historian.

In later years Bernard Gilpin’s good works extended beyond his parish and he is perhaps best known for his annual journeys through the dales of Northumberland, Cumberland and beyond trying to restore church life in a region where civil society seemed to have been devastated by civil wars, wars with Scotland, feuding and robbery. He is reputed to have quelled feuds between families of Border Reivers and to have re-started services in tumbledown old chapels scattered around Northumberland. For this he is remembered as the “Apostle of the North.”

Gilpin’s adventurous life came to a tragic and rather unexpected end on the 4th of March 1583. Some months earlier he was knocked down by oxen in Durham market place and suffered injuries from which he never recovered. Gilpin was buried beneath a simple altar tomb, located in the south transept of the parish church of St Michael and All Angels, Houghton le Spring, in the centre of the community which he had served for a quarter of a century.

Many residents of Houghton today commemorate Bernard Gilpin’s goodness and generosity in the roasting of the ox at the annual “Houghton Feast.” The Feast is an ancient festival that has its origins in the 1100s as the dedication festival to the Parish Church of St Michael & All Angels. Houghton Feast takes place in the first two weeks of October  and lasts for ten days. 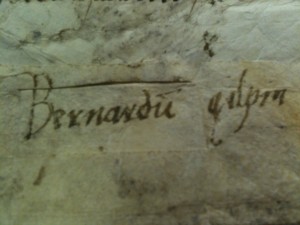