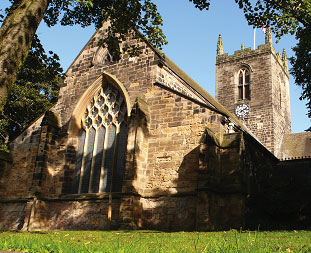 This stunning grade one listed building marks over 1000 years of Christian worship and over 4000 years of human history.

St Michael & All Angels Church is of Saxon foundation, the 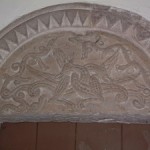 Saxon doorway and walls were discovered during excavations in 2008. The Saxon doorway can be viewed through a glass panel in the floor. There are also hints of earlier non Christian worship occupying the site. There is a high probability that the remains of a Roman temple lie under the chancel, and a whinstone boulder circle suggests that St Michael’s may once have been a site of Neolithic worship. Today, half of what can be seen above ground is medieval, built in the 1300’s. This includes the columns and central tower, while the north wall and roof are Victorian. 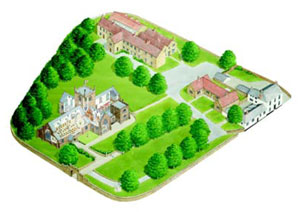 The present medieval building is set within a conservation area and together with the Kepier Hall and Almshouses is one of the finest examples of ecclesiastical complex in the region.

St Michael & All Angels is the home parish and tomb of Bernard Gilpin, who is known as the ‘Apostle of the North’. Gilpin was Rector of Houghton from 1557 to 1583, and was a true disciple of Christ.

After the Victorian re ordering under Rector Gray, St Michael’s had minor changes and modernisation, including a reduction in the number of pews in order to create space for amenities and social area in the west end. In 2008 St Michael’s carried out a significant programme of reordering, making the church accessible for all and suited to the needs of congregations in the 21st century. During this time many exciting discoveries were made, and the ancient history of St Michael’s had to be re-written. 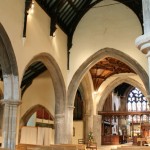 🥚We’d be egg-static if you get your creative